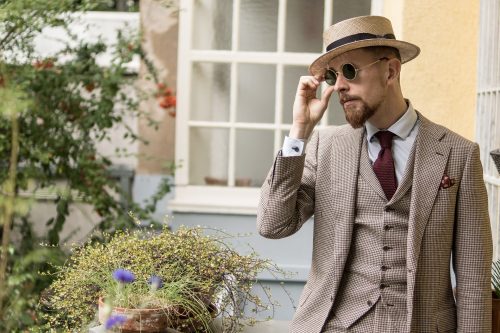 Opinions differ on the boater hat – either you love this circular straw hat or you hate it. To wear it, you need courage and the right occasion.

First of all it is important to limit the straw hat season exactly. It begins with Straw Hat Day on 15 May and ends with Felt Hat Day on 15 September. A disregard has already led to one or two fights in earlier years.

Ideal occasions during this time are entertaining activities such as visiting horse races, polo matches or other sporting events. The boater is also associated with the good-humoured gondoliers of Venice. The truly daring straw hat wearers even combine it with a dinner jacket. I think the Boater is great, because for me it conveys lightness and humour. The latter is probably the problem of its despisers, because as the wearer of a straw hat one should not take oneself too seriously. But if you combine this hat with a portion of self-irony, it is a real adornment. The German term Kreissäge means circular saw by the way.

Circular saws differ mainly in hat band and material. The most typical variant is rough wheat straw* and uses a colorful hat band*. More elegant variants are finer and include a black hatband*. In addition to the usual suspects made of straw, there are also alternative variants made of sisal (see article pictures), jute or hemp. But cheap carnival hats should be avoided. These have nothing more to do with self-irony, they are just silly.