Classic menswear and the fine life 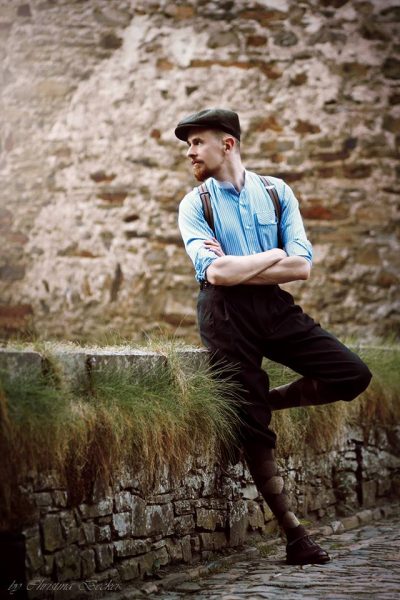 A very special type of leg wear are breeches and knickerbockers. Especially in combination with knee socks in Argyle pattern they create a very typical appearance, which many people associate with traditional golfers, for example. In Olympic fencing, the knee breeches are still an integral part of the equipment. This is because knee breeches offer a lot of freedom of movement. Ideal for sporting activities as well as hiking and cycling tours.

Since the Dutch immigrants in New York were big fans of the Knickerbockers, this word became a synonym for the New Yorkers themselves. This is how the New York Knicks came to be known by their club name.

Important for the mobility of the trousers is its baggyness. The trousers usually reach to the middle of the shin. Nevertheless, the end is fastened directly under the knee so that the fabric of the trousers falls over the knee. This way the trousers do not stretch, even if the leg is bent completely. This also resulted in its alternative names plus fours, because plus fours are Knickerbockers that fall four inches below the knee. Every Knickerbocker is a breech, but not every breech is a Knickerbocker. Because knickerbockers are characterized by this baggyness. Instead, modern breeches are made of elastic material so that the aforementioned freedom of movement is guaranteed even without being baggy.

You can get simple breeches at Amazon* for example. The two pairs of breeches shown here I have sewn myself, so to speak. In the end, all you need is a pair of trousers that are as wide as possible and that you cut off in the middle of the shin. You will also need a new hem including a draw string or a hem that can be buttoned. The shown three-piece with knee breeches comes from Hockerty*. I ordered a second pair of trousers here and altered them as described.